Sunlight and skin damage – It’s not in the small print!

Imagine for a moment that you are not studying biology but lying in the sun relaxing, listening perhaps to the sound of people and the sea. It feels great, but behind the feeling lurks a danger and it’s not mentioned in the ‘small print’ of the holiday brochures.

As you lie in the sun you will be exposed to ultra violet light radiation from the sun. If you are pale skinned and have not applied plenty of sun screen, the radiation will be damaging your skin. If this happens often it may lead to skin cancer including the very aggressive melanoma type. The damage is caused by solar Ultra-Violet type B (UVB) radiation making some of the ‘letters’ or bases of the DNA molecule fuse together. This change, or mutation, in the DNA sequence prevents the code from being read and translated correctly. Some sun-tanning devices can also damage your DNA. Remember, the damage may not be evident until perhaps some years later. Enjoy your time in the sun, after all it does help you produce the vitamin D you need, but be wise before the event, not after it!

Smoking tobacco causes lung cancer, and it kills – It’s on the packet!

In a similar way to solar radiation, some of the approx. 7,000 compounds in tobacco smoke distort the shape of the DNA molecule and causes changes or mutations in the DNA code. Smoking can cause lung cancer and also contribute to other health problems as well, such as poor breathing and heart conditions. 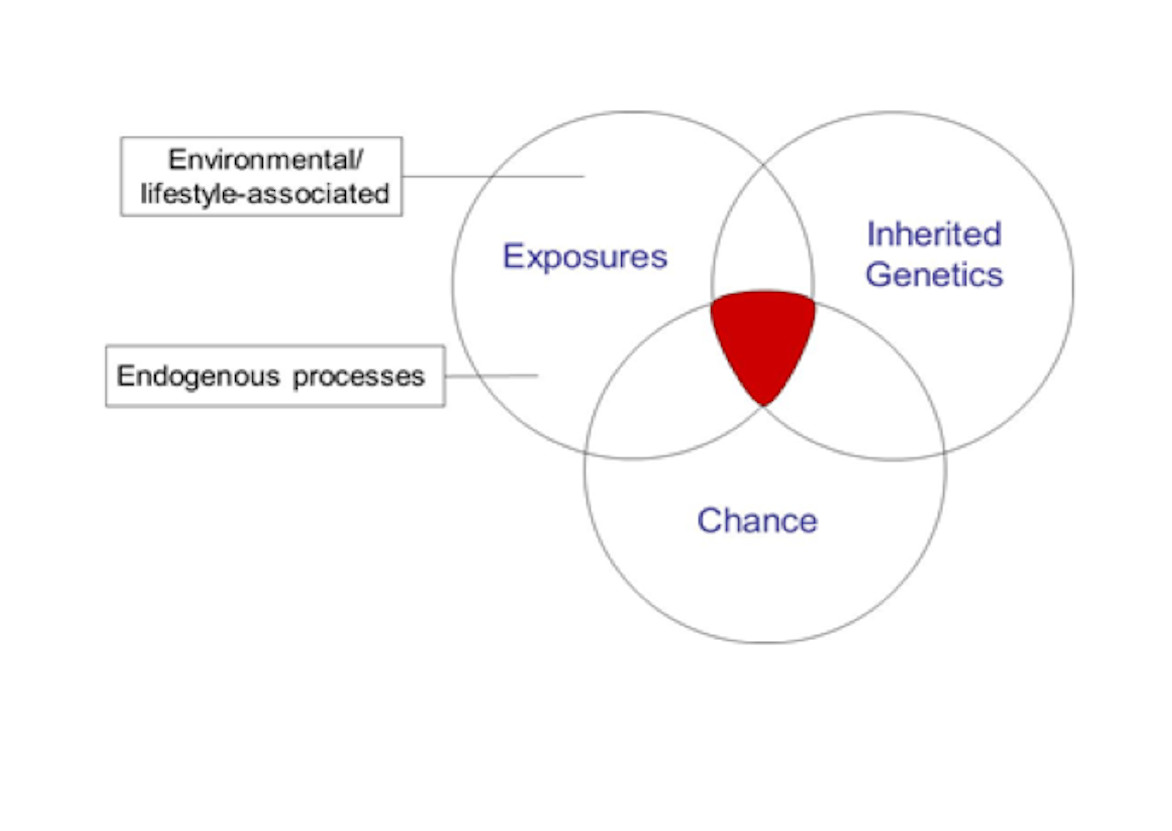 Graphic 10. Venn diagram showing three sets of factors that can contribute to cancer formation.Most cancers will develop when factors from the three sets are present as a mix, (the red intersection). Credit: Courtesy Professor Mel Greaves, FRS. (ICR)

What are the specific factors in each circle (set) in the diagram?

Our cells are constantly bombarded by a whole battery of assaults. Fortunately many have little or no long term effect. Several environmental factors, including some involved with lifestyle, are associated with cancer development.

The ‘exposures’ set of factors and processes can be divided into two sub-sets:  Environmental and lifestyle-associated factors and Endogenous (internal) processes in the cell.

4.1.3] Environmental and lifestyle-associated factors.
Environmental factors that increase the rate of mutations include conditions where you live, travel and work. In some places this will include radioactive materials, exposure to substances that are carcinogenic (cancer associated, but not directly causing mutations) and, to a lesser extent, exposure to heavy metals in drinking water and radon gas seeping up from underground rocks. Certain viruses, bacteria and parasites are also associated with cancer development, but in an indirect way.

Lifestyle-associated factors indirectly linked to certain cancers include being over-weight if you are middle-age or older, drinking alcohol, having a high birth weight and eating too much red meat and/or processed food. Most meat products have to contain preservatives. These can react with chemicals in the gut to produce small amounts of carcinogenic substances.
As mentioned earlier smoking tobacco and exposure to UVB radiation through sunbathing, are major factors that can cause mutations. In the UK cigarette smoking is declining but obesity is increasing.

4.1.4] Endogenous processes. Mutations can also result from some chemical and physical processes taking place within the cell. Chromosomes and DNA strands can break, and the physical processes that take place during cell division and separation can go wrong. DNA can be miscopied and repaired DNA sometimes presents its own problems.
Chemicals, known as ‘reactive oxygen (or nitrogen) species,’ can also directly cause mutations. Cancer can also be initiated by chronic (long term) inflammation such as that produced by stomach ulcers in the case of stomach cancer, and chronic acid reflux in the case of oesophageal cancer.

Most people are interested in their family tree; their family history. The total numbers of truly inherited diseases or predispositions to diseases are not high, but a few mutated and heritable genes are highly associated with cancer development. Examples of these are: BRCA1/2 for breast, ovary and prostate cancer and p53 in Li Fraumeni syndrome for leukaemias. People can observe patterns in the family tree and an anticipation of what might happen to them understandably looms large. This knowledge can be both stressful and helpful. Through genetic analysis and counselling it can lead to helpful treatment, but it may lead to unnecessary procedures. With genetic testing now available for a fee via the ‘web’, personal ethical decisions will need to be made.

Cancer genetics and different communities.
There are ‘cancer hotspots’ across the globe. Many of these are probably due to poor health, medical and education conditions and facilities rather than inherited factors, but the situation is not clear cut. Clearly not diagnosing and catching cancer early is going to influence the statistics. Members of the Ashkenazi Jewish community however may carry an increased predisposition to cancers arising from mutated versions of BRCA1 and 2 genes.  (Read more in Section 4.2.23)

Mutations in genes generally occur randomly and are happening all the time. There is a chance that some of these mutations in DNA will cause the production of damaged proteins and so create problems. Other mutations may have little effect, whilst some may be of potential benefit to the organism.
Over the course of millions of years of evolution, DNA damage repair and cell suicide systems have evolved, and have been selected for, so organisms have ways of dealing with errors in the DNA. But there is a chance that some damaged cells will ‘escape’ the repair or destroy systems and go on dividing and producing rogue cells. Chance mutations and evolution will always play a part in cancer.
The element of chance also operates when parental genes are inherited during sexual reproduction. Which two gene alleles come together from each parent is a matter of chance. Genes conveying a predisposition to cancer are inherited in this way. (See graphic 13)