2.2.1] Until fairly recently it was thought that the cells from a specific cancer, for example breast cancer, were genetically more or less the same; and that all the cells were derived as true clones from an original cancerous cell. Since about 2005 research using genome sequencing has shown that although different cancers and different cells within a specific cancer are genetically different (called genetic heterogeneity), there are some commonalities, some patterns. This information is steering new approaches to cancer treatments (see section 9).

2.2.2] Cancer is turning out to be much more than a group of aberrant cells. Cancer is a complex ecosystem, in which cells are part of a system that includes extracellular matrix, the development of new (but poor) blood vessels and the use of anaerobic respiration to release energy.

The system operates in an almost, but disorganised, organ-like way. Cancer ecosystems can modify their habitat to foster cancer cell growth. They can do this by altering some aspects of metabolism, cell signalling pathways AND the microenvironment around the aberrant cells which can be really wayward. Cancer cells adapt to ecosystem pressures and so, over time, acquire robustness. It is survival of the fittest (and nastiest).

The ability of cancer cells to produce certain changes marks them out compared with normal cells. [See Section 2.1.3]
The cell replication system can also be ‘hi-jacked’ by certain viruses that cause cells to divide excessively to aid virus replication. Some epigenetic factors, whilst being heritable but not altering the DNA code, can also modify control systems associated with mutations.

2.2.3] Cancer is a system involving Darwinian adaptive evolution and natural selection.
Cancer cells divide in an uncontrolled way. At each division, the cells, already carrying mutations, can express more and different mutations.
This is Darwinian style evolution at work, and in cancer cells at a fairly rapid rate.

The upshot of this is that the cancer cells in individual patients, although derived from a single clone are NOT all of the same type, and are said to be heterogeneous.
The result of this is:

[1] for treatment there is a no ‘one procedure that treats all’ situation and,

[2] even if several treatments are used, there is a chance of some cells ‘evading’ treatment and,

[3] some cells will show ‘resistance’ by mutations changing the cell’s signalling system and metabolism, and negating the effect of the anti-cancer treatment.

2.2.4] Metastasis: the dispersal of cancer
One of the most unfortunate aspects of some types of cancer is their ability to spread from the original site to other parts of the body and hi-jack essential body functions causing morbidity and sometimes death. In their new environment they often create a more dangerous condition and, along with the original cancer, are harder to treat [See section 7: Metastasis and 8: Treatments].

2.2.5] Cancer in context:
There are about 200 different types of human cancer with some types occurring at a higher level in some countries than others. Many ‘organ-named’ cancers display sub-types. There are for example 10 sub-types of breast cancer and three sub-types of kidney cancer.

The outlook for patients with some types of cancer, for example lung and pancreatic cancer have shown little or no improvement. But the prognosis for patients with leukaemias and breast cancers has improved greatly.

Cancers are also found in other animals including hydra, (a two-layered polyp) and in plants. 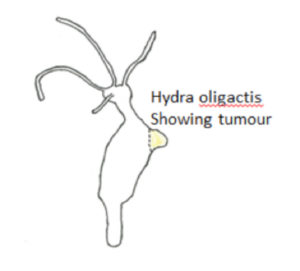 Cancer occurs in many organisms with some being more susceptible than others.
2.2.6] Plants: tumours have been found in plants in species ranging from almond and walnut trees, to raspberries, red algae and fungi and as tumour-like growths in many other plants. Insect-induced galls, such as oak galls, are NOT tumours.

A] Two-layered polyps: Hydra (two species)
B] Bivalves: some soft-shell clams, certain mussels from British Columbia and some forms of Cockles
C] Fish: cancerous tumours have been found in many fish across the globe including: coral fish [skin cancer], rainbow trout [liver cancer] and sharks
D] Amphibians: Frog hybrids in Far East [pancreatic cancer], Northern Leopard frog [renal cancer].
E] Reptiles: snakes, Komodo dragon, marsh terrapin and marine turtles.
F] Birds: two main tumours found in birds are, unusually, initiated by viruses, namely Rous Sarcoma and Marek disease. Domestic fowl are often vaccinated against Marek disease.
G] Mammals (non-human): many mammals are susceptible to cancer and examples range from cats, mice, rats and dogs; the marsupial the ‘Tasmanian Devil’, cattle and Beluga whales. (Whales as group do not appear to exhibit as many tumours as one would expect given their size and number.)

Animals that do not seem to be susceptible to cancer:
Interestingly two vertebrate subterranean rodents, the naked (African) Mole rat and the blind mole rat from the Middle East appear not to develop any type of cancer. Researchers think they know why this is, but the reasons are not applicable to humans.

Animals susceptible to transmissible cancers:
Cancers are NOT normally transmissible between individuals BUT there are nine known exceptions: including Golden carpet soft-shelled clams, a wild carnivorous marsupial called a Tasmanian Devil, dogs (but not usually domesticated ones) and two types of cockles.

For an interesting Blog about Tasmanian Devils see here.

and for cancer in bivalves see here.

2.3] Cancers in humans are ancient diseases – a bit of history.

2.3.1] Evidence of cancer existing in humans as long ago 2.0 million years ago has been found as a fossil of a benign cancer in the vertebrate of a child. In 2016 a 1.7 million year old fossil of cancer in a toe bone was found near Johannesburg. Mummified bodies from Ancient Egypt also show signs of cancer.

In the UK there is some evidence that cancer was afflicting people in the Bronze Age.

2.3.2] The words ‘cancer’ and ‘oncology’:
The oldest definition of cancer (breast cancer) dates to about 3000 BC. But names were not given to the disorders until the time of Hippocrates. Hippocrates (460-370 BC) having noticed that some tumours had protrusions coming from a central mass, likened tumours to crabs and used the Greek words carsinos and carcinoma to describe the tumours. Celcus (25 BC-14 AD), a Roman, translated the Greek words into the Latin cancer. Another Greek, Galen (130-200 AD) used the word oncos, meaning swelling, to describe tumours. Oncos has become ‘oncology’, the study of cancer.