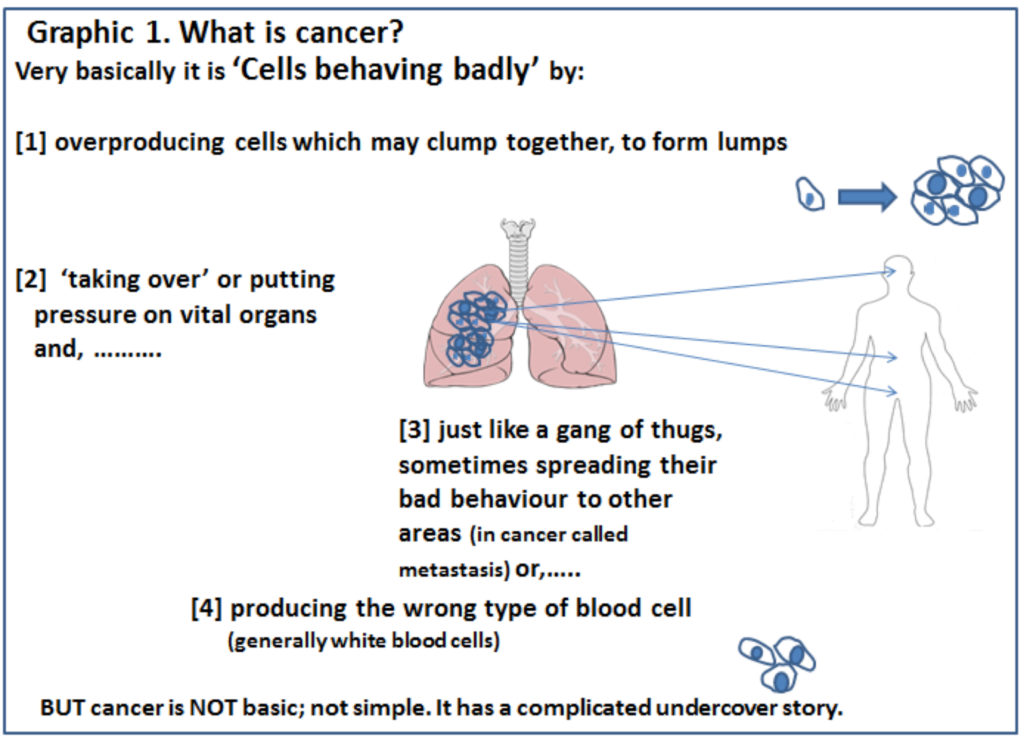 BUT if this is what happens when ‘cells behave badly’, what would we expect if ‘cells behave well’? We would expect our cells – and there are about 10 trillion of them – to operate in a ‘steady state’ in which positive and negative actions keep our cell systems in balance for our wellbeing, – a state of ‘cell homeostasis’. We would expect deleterious mutations to be spotted; the damage repaired or, the cell scrapped and the contents recycled via apoptosis (programmed cell death)

Recent research shows that cancer is highly complex, sometimes acting like a separate organ, albeit a disorganised one with the capacity to carry out subversive activities.

There are about 200 different types of cancer. Many of them display characteristics that help define that particular cancer. This is of considerable use to pathologists, but it also means there is no ‘typical cancer cell’.
Uncontrolled cell division is often, but not always, a characteristic of cancer. The number of a particular type of cell, often of abnormal appearance, increases. In leukaemias for example many more abnormal blood cells are produced and crowd out the normal population.
Some cancer cells have ‘crab like’ protrusions (image 1a below), hence the derivation of ‘cancer’ from Greek word carsinos. When cells clump together, as in a solid tumour, they often display a disorganised state. An example is shown in the left hand part of image 1c (below) of prostate cells.

2.1.4] Cancer in humans has been called an ‘evil genius’ because of the subversive activities cancer cells are able to carry out.

Amongst other traits, cancer cells can:

The list above gives some indication of the complexity and wayward nature of cancer and the problems research scientists and medical people are up against.
(This is a very simplified version of ‘Hallmarks of Cancer’ by Hanahan and Weinberg)

2.1.5] Metastasis (Section 2.1.3, item 6 above and Section 7). It is an unfortunate fact that if a cancer spreads to other parts of the body (called metastasis) it becomes much more dangerous and more difficult to treat. At this late stage most cancers have also acquired resistance to cancer drugs. Most deaths due to cancer occur after the cancer has metastased. Diagnosis and treatment as early as possible is very important.