The 2014 Hooke Medal winner was Anne Bertolotti from the MRC Laboratory of Molecular BIology, Cambridge.

Anne Bertolotti has been a group leader at the MRC LMB since 2006 and an INSERM scientist since 2001. She was elected an EMBO Young Investigator in 2005 and an EMBO Member in 2013. Anne obtained her PhD from Strasbourg University working with Pierre Chambon and Lazslo Tora then pursued postdoctoral training in David Ron’s lab at the Skirball Institute of Biomolecular Medicine in New York. Anne has made important contributions to our understanding of the mechanisms underlying the deposition of proteins of abnormal conformation in cells – hallmarks of medically important pathological conditions such as Alzheimer’s and Parkinson’s diseases. More recently her lab has made important progress in manipulating the cell’s defence systems to help cells survive protein misfolding. Visit Anne’s website for more information on her research.

You can also read an interview with Anne in the 2013 Winter Newsletter conducted by Alexis Barr.

Anne was presented with her medal and gave the Hooke Medal Lecture at the BSCB-BSDB Spring meeting in March 2014. 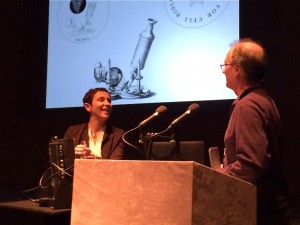