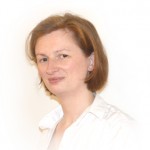 Dr Cowling is a Group Leader in the Medical Research Council Protein Phosphorylation and Ubiquitylation (MRC-PPU) Unit in the College of Life Sciences at the University of Dundee.

Her group investigates how oncogenes and cellular signalling pathways influence the mRNA cap structure resulting in changes in gene expression and cellular physiology.  The major contribution of Vicky’s group is to uncover that the mRNA cap is dynamically regulated in the cell, integrating diverse signalling pathways to drive changes in protein synthesis and cell proliferation.  Vicky’s group are exploring the mRNA cap as a therapeutic target with which to inhibit cancer cell and parasite growth and proliferation.

Vicky performed her PhD research at Cancer Research UK in London with Julian Downward and Gerard Evan and her postdoctoral research with Michael Cole at Princeton University and Dartmouth College, USA.  She initiated her independent research group in 2007 at the University Dundee.  Vicky was awarded a Lister Institute Prize Fellowship in 2011, an EMBO Young Investigator Award in 2013 and an MRC Senior Fellowship in 2014.

“I am delighted that our research has received this recognition from the British Society for Cell Biology.  I’m looking forward to discussing our current research at the annual BSCB/BSDB meeting next year.”

The WICB Early Career Medal was been established to mark the 50th anniversary of the founding of the BSCB. It is an annual honour awarded to an outstanding female cell biologist who has started their own research group in the UK within the last seven years.