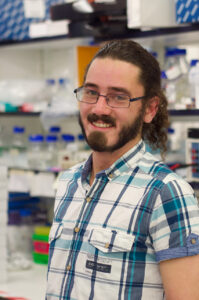 Tom then transitioned to his current role to investigate how proteasome assembly is induced upon stress in budding yeast. He recently described how relocalisation of proteasome regulatory particle assembly chaperone mRNAs (such as Adc17) to densely-packed actin structures (actin patches) specifically increases their translation here. 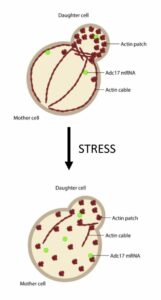 Tom is an enthusiastic champion of outreach activities, designing several cell biology-based games and activities for young kids. These have been employed in school, community, and home settings. He is releasing several of these for release as free print and play games, including Cell Survival, where players use cell stress response elements (‘defences’) to counter environmental stresses (‘dangers’). Several new releases will be announced through the @CellBioGames twitter account in the coming months.

The medal will be awarded during the next joint BSCB/Biochemical Society co-organised meeting Dynamic Cell V which will be held on 17-20 April 2023 at Loughborough University.

The Postdoc medal was established in 2020 to recognise early career researchers who have made a major contribution to UK/Ireland Cell Biology during their postdoctoral training. You can read more about the medal here.