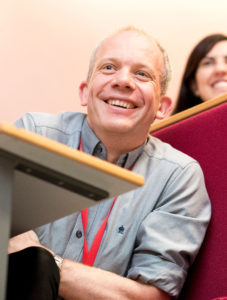 Following a PhD at the University of Cambridge with Steve Jackson (1997-2001), Andrew moved to the Massachusetts Institute of Technology, USA to train with Peter Sorger. Here, as a Jane Coffin Childs Fellow, his enthusiasm for kinetochore biology was ignited. He returned to the UK in 2005 to establish his independent laboratory at the Marie Curie Research Institute, before moving to the University of Warwick in 2009 to co-found the Centre for Mechanochemical Cell Biology (CMCB). In 2014 he was appointed Professor of Cell Biology and became a Wellcome Senior Investigator. He was then awarded a Royal Society Wolfson Research Merit Award for his work on chromosome segregation in 2015. He co-directs the MRC Doctoral Training Partnership in Interdisciplinary Biomedical Research, and this year, became Head of Division of Biomedical Sciences at Warwick Medical School. Andrew’s laboratory has made important contributions to understanding how human cells ensure error-free chromosome segregation using a combination of live-cell quantitative microscopy, in vitro reconstitution and computational methods. Most recently he has revealed novel features of the kinetochore – the multi-protein assemblies that physically connect chromosomes to microtubules. Visit Andrew’s website for more information on his research.

You can watch Andrew’s medal lecture on the BSCB YouTube channel here.